skip to main | skip to sidebar

Off to see The Wizard 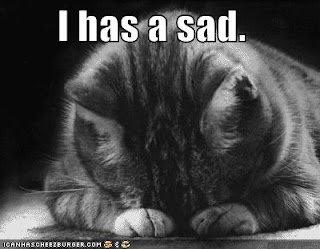 This is a Lily Update.  It has bad news.
You don't have to read it; you will hear about it eventually, though.
But, perhaps you want to brace yourself first.

We have known for weeks that the super-special radiation treatments she got in September and October (the ones we were so excited for and hopeful about) were not working.
She called me Friday night to tell me she has chosen not to take a chemo treatment that was available.  The pain this chemo would cause could likely last as long as the time on earth it would buy her.

You and I know that's no way to live.
What's the point of it?

So, she has made this very brave decision to forego any further treatments.
She has surrendered.

Best guess is she has less than six months left.

Nonetheless, I managed to make her laugh during our conversation.
And it involved the fish:
Lily was talking about holding memorial services instead of a funeral because they are new to Kansas, and most of their loved ones are in Nashville where they raised their children and in Michigan where Lily and her husband both grew up.  So, she is considering cremation.  And she asked if I had any thoughts about it.
"Well," I tried to say with a straight face, "do you want the green fish for an urn?"
She was silent.
"Nevermind," I said.  "It doesn't have a lid."
"You'd tip me over and pour me out."
"Forget it.  You can't have the fish because I want the fish."
"I don't want the fish."
"You're not getting the fish."
"Good.  Cause I don't wanna sit here and worry about that fish showing up after I'm gone."

I would think, at this point, she could use some guidance and some peace, the ability to finish the things she needs to finish, and comfort to those who love her.
If you feel moved to pray, I think those would work great.

No words to comfort, Roses. Just..well, no words. We'll pray.

Doctors don't know everything. Mirracles happen all the time. Good thoughts and prayers have done it before I see no reason they won't help now. Big hugs to your family.

Oh man, Roses, I am so sorry... There's a lot to be said about taking control of one's own destiny, but that doesn't change the fact that it still just sucks donkey balls.

Oh Roses. I understand her decision, but man does it suck to be stuck in such a position. ((HUGS))

Roses, I've thought all day what I wanted will let you know what she needs, just as my Dad did 23 years ago. He needed us with him and not sad. My husband drove me home for Sunday dinner (120 miles) every weekend (I couldn't have driven myself). I know you are too far away to do that but could you give youself and Lily the "gift of Sype" so that you can talk face to face? It makes all the difference, I think.

Roses, I've thought all day what I wanted to say to you. Lily will let you know what she needs, just as my Dad did 23 years ago. He needed us with him and not sad. My husband drove me home for Sunday dinner (120 miles) every weekend (I couldn't have driven myself). I know you are too far away to do that but could you give yourself and Lily the "gift of Skype" so that you can talk face to face? It makes all the difference, I think.

*hugs* because I have no words for you.

Prayers, for all of you.

Prayers for Lily and all of you...I. Hate. Cancer.

I'm praying. I've been praying actually... since the first day you posted she had it. I don't know you and I definitely don't know her, but there have been times over the past year that I've been rather obsessed about praying for her.

I'm struggling with this for you... I cannot begin to imagine getting this call from my sister.

My heart breaks for you...

Roses
My name is Roses. I am a recovering radio DJ and a 50-year-old college student. I keep my student ID in the same wallet pocket as my AARP card because the contrast amuses me greatly.

Connect here, and get notified when I post something new!

What kinds of posts are you looking for?