skip to main | skip to sidebar

As of this afternoon, three quarters of the Ack!Thbbbt! family are half-vaxxed, and one quarter is fully vaxxed.

I was told to behave and quit whining.
Not once was it suggested that I might be sleep deprived or hypoglycemic.
A simple snack and a nap would have done far more to modify behavior than the name calling.
The correct answer to the question, "What is wrong with you?" never came.
"You need a nap," isn't an answer when it's presented as a punishment.
It takes a long time for a person to unbelieve a statement that had been repeated to her over and over for the first 22 years of her life.
I know now that I'm wasn't a lazy brat, at least not as often as I was told that I was.
But I still hear the internal accusations when I'm not feeling well and wondering what is wrong with me.
Sorry this wasn't one of the funny posts.
I'm still working through some stuff, apparently.

Two Modes of Work From Home

After 13 months of working from home, I have identified two modes under which I function. There is no in-between.

Present and Accounted For

Reminiscing aloud about Elder Son's birth, The Husband mentions how a class of med students came into the delivery room to look up the hospital gown of the woman giving birth to his first-born child.

The Husband and I became eligible for the COVID vaccine today... one day before everyone age 18 and older becomes eligible in Wisconsin.

One. Day. Before.
We jumped online and scheduled our appointments together right away.
Younger Son has one shot in his arm already.
It's getting close, you guys.
I'm so happy and excited.

This is my Happy Journal. 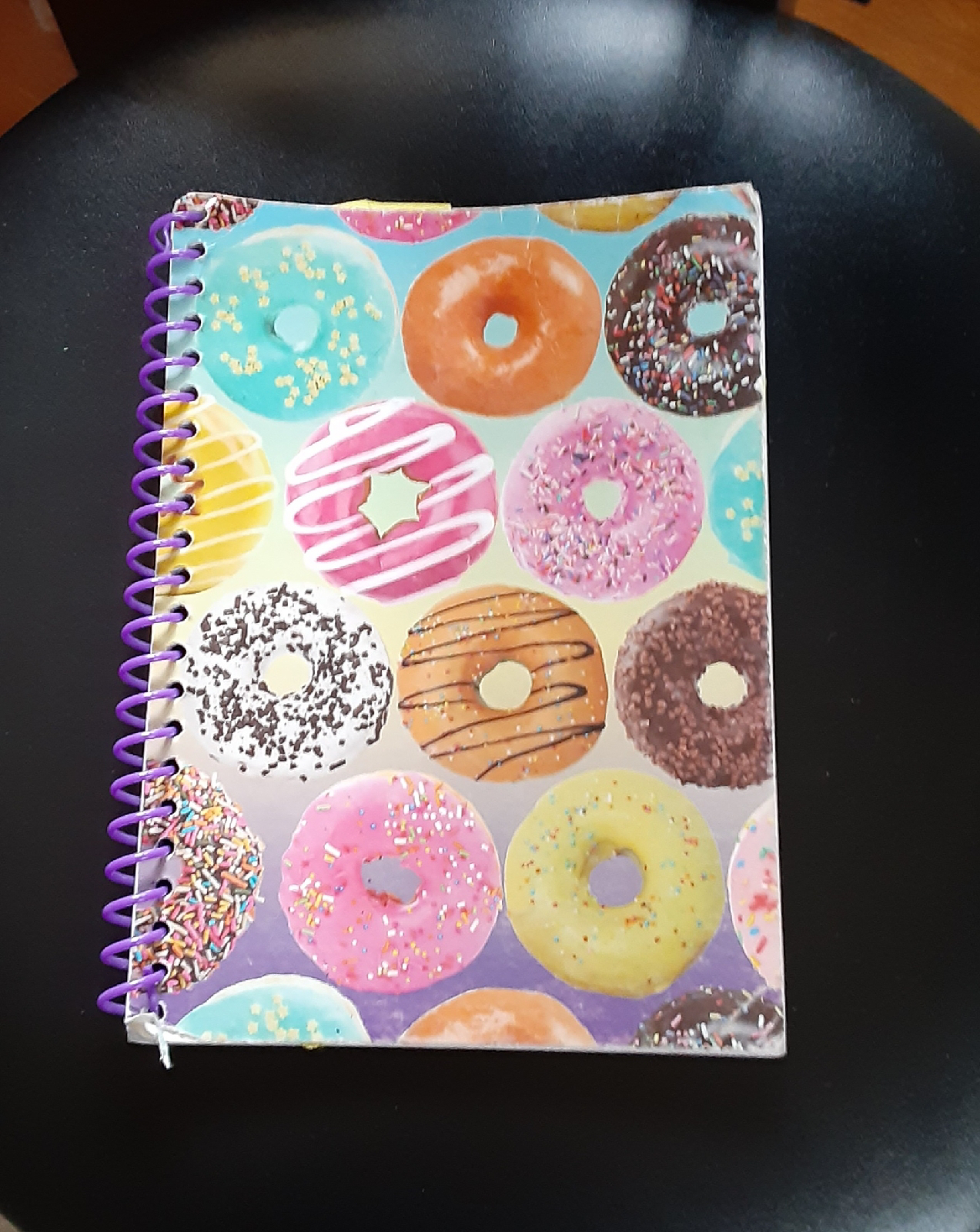 I bought it years ago for one specific reason: to make me happy.
I wanted a notebook that would evoke happiness just by looking at it. To find this particular notebook, I had pawed through all the notebooks at the store and eliminated one by one all other notebooks of lesser happiness.
Donuts won.
Inside this Happy Journal are dated entries detailing things I did that made me feel smart, capable, and valuable. I kept it with me through previous jobs to remind myself that I was smart, capable, and valuable. I wasn't getting the kind of feedback or support I needed from coworkers or management. In fact, more than once at multiple companies I was told, as a matter of assurance, "If no one is talking to you, that means you're doing a good job."
That simply doesn't fly for me. So I went out, bought a notebook, and created my own support system.
Support system of one.
I present to you this Happy Journal now because as of today,  it has been retired.
Management and coworkers at my current place of employment are generous with their support and feedback. It's been 20 months since I've had to write myself a reminder that I'm smart, capable, and valuable because other people do that for me now.
For your consideration:
Friday morning the head of my department sent an email to his boss and to my supervisor and to me. The email spelled out how ecommerce revenue has increased as a direct result of the work I've done. He included stats and comparisons to past financial performance as evidence.
I don't know what prompted him to send this email, but it clearly displayed how smart, capable, and valuable he believes I am.
I found out over the weekend that he had also shared the stats from his email with the owner of the company and Board of Directors.
So.
Not only does the head of my department think I'm smart, capable,  and valuable, but he also thinks upper management needs to know it, too.
Damn.
Is that amazing, or what?
So, yeah.
I don't really need a Happiness Journal for reminders anymore. The reminders come from other places now.
It is Sunday night, and I am genuinely excited about going to work tomorrow.

The Ones with the Pajama Pants

Dream #1
I'm at work. Everyone is happy. Coworkers I don't even know make a point to say hello as I walk past. All the workstations are different, so I'm not entirely sure where I'm supposed to be, but this is not a problem because everyone is getting used to the newness of it all, and everyone is super helpful and kind.
At one point the dream tells me I forgot to put on pants. When I look down, I see I'm not actually pantsless; I am wearing pajama bottoms. These ones, in fact... 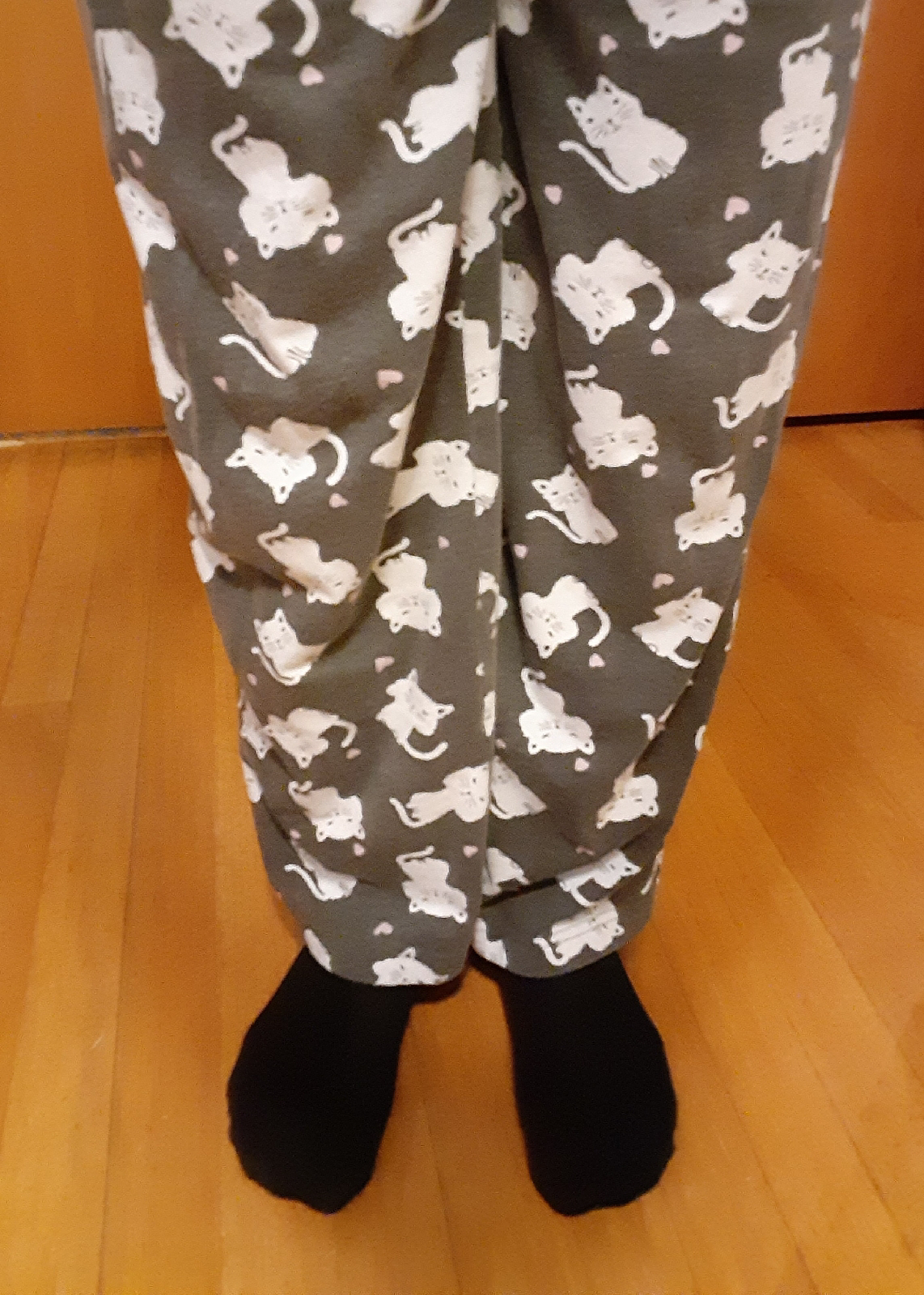 I should be embarrassed, but I'm not because no one seems to care.
Then I realize I'm not wearing a mask. I ask my boss what I should do. He says, "Don't worry about it. Nobody is wearing one because it's okay now."
It was as if every bad turn was negated as soon as it was recognized.
It was a really good dream.
Dream #2
I'm driving through my hometown in Michigan. It's an unplanned trip, no one is expecting me to be there.
I stop at a reception venue to drop off an RSVP for my niece's wedding. She is there and happy to see me, but I've interrupted her bridal shower to which I had not been invited.
"You're not supposed to be here," I am told by various family members.
"I'm not here. I'm just dropping this off."
"But you weren't invited."
"I know. I'm not here. I just stopped in on my way through."
Back and forth the dialogue goes until someone points out, appalled, that, "You are wearing pajama bottoms!"
I look down, and sure enough, around my ankles are the same pair of pajama pants I'd been wearing in the happy dream.
"Well, yes I am." I then defiantly and proudly pull up the jammy pants. "And you know what? No one else cares."
I leave, and the dream ends.
I have no idea what this dream means, but I woke up from it feeling both angry and satisfied.

About a year ago I had a 24 hour bug that made me throw up everything I ate or drank. Not eating anything wasn't so bad, but I was seriously dehydrated.

Sooooo thirsty.
There had been a glass of ice water next to my bed,  and I had stared at it wishing so hard that I could drink it.
I vowed that once I felt better I would never stop drinking water. I think of this vow everytime I refill my favorite glass. 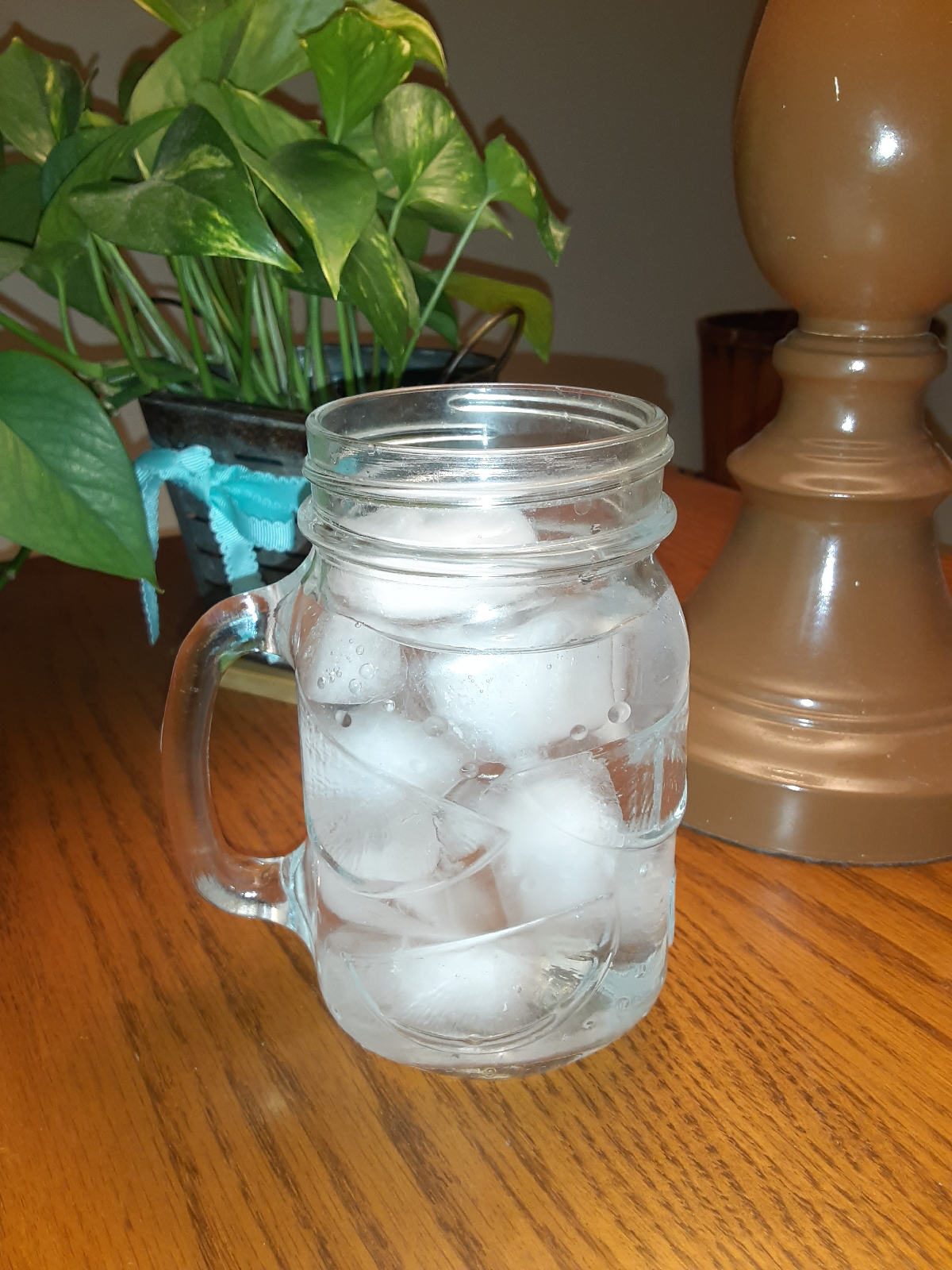 In other news...
It's been twelve months since I last hugged my sons. They come visit once a week, masked and distanced.
I just stare at them wishing I could reach out and hug them.
I vow that once we're all vaccinated,  I will never stop hugging my boys.
💕

Elder Son: (talking about a video game) I built a spaceship that can produce other smaller spaceships.

Ending the Week on a High Note

This week started out rough, but it ended on a high note.

The early week roughness was a combination of sleep deprivation and work stress. When Drew left the company, his duties were divvied up among the team until his replacement can he found. The duty assigned to me is really juicy, and it's something I'd been wanting, actually, as it lines up well with what I was hired to do. Even better, it's my duty for keeps. My supervisor wants me to handle it permanently going forward. I kinda wondered why it hadn't been on my plate to begin with, but that's neither here nor there because it's mine now.
The thing is, it's a BIG juicy duty. Drew and I talked about it before he left, and we agreed that one person alone could spend 40 hours a week on this one thing.
So it's a BIG juicy duty on top of all my other responsibilities.
Hence, the stress.
And from the stress, disruption in sleep.
Throw in mid-winter blues and some sub-zero temps, and Roses is a sad girl.
But some good things happened this week:
- Elder Son had a birthday, so the whole family was here for cake and presents. Yay! Socialization with real live, in-person human beings!
- I bought a stand-up desk, and The Husband and I are finally moving our workspaces out of the diningroom and into one of the boys' empty bedrooms. Yay! Separation of work and home life finally after 11 months!
- Daytime high temperatures broke double digits twice this week, so I was able to go for a walk a couple of times. Yah! Exercise without risking severe bodily harm!
- At the office, I was granted permission to have Drew's abandoned cubicle. Drew's cubicle is better than mine. My cubicle has a vent located directly above my head; it hisses constantly which drowns out all the chatter in the room. That's cool if you like solitude, but it's not cool if you have a deep seated childhood issue related to feeling left out. In contrast, Drew's cubicle is deep in the hub of the department surrounded by fun people who love to chat and laugh. His cubicle also has a view of windows; my cubicle does not.
Today I received notification from the IT department that my computer and phone have been officially moved over to Drew's old space. Monday morning I can go in and transfer my personal belongings.
Yes, I realize it's a little ridiculous to get excited about moving from one cubicle to another in an office where I'm not actually working. But this change will improve my workplace happiness in so many positive ways that I feel better about my entire job in general. Yay! Job satisfaction!
- But probably the best thing that happened this week is that I'm finding out just how much I'm enjoying the new juicy duty, and I'm finding out that I know more about how to do it than I originally thought. Yay! Roses has a big smart brain!
So, life is good today.
If you and I had talked four days ago when I was tired and sad, you might have been worried about me, but I'd have told you it would all work out, and I'd have been right.
Because you see, today life is good.

Roses
My name is Roses. I am a recovering radio DJ who graduated college at age 52. I kept my student ID in the same wallet pocket as my AARP card because the contrast amused me greatly.

Connect here, and get notified when I post something new!

What kinds of posts are you looking for?